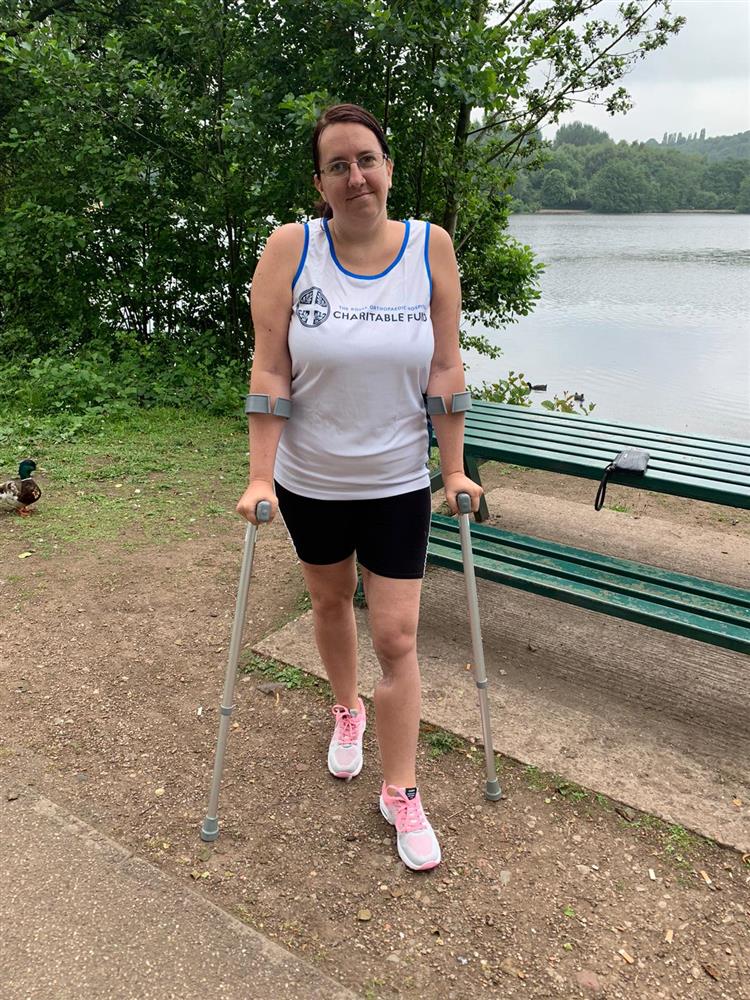 Natasha Paczkowski is a patient at The Royal Orthopaedic Hospital (ROH). She lives in Newcastle under Lyme with her daughter and dog, Teddy. In March 2019, she discovered a lump which was later diagnosed as myxoininflammatory fibroblastic sarcoma, a form of cancer. Here is her story…

“One evening I was drying myself after having a bath when I felt a lump the size of a marble at the back of my leg. I thought it was weird but never thought in my wildest dreams it would be anything sinister as I had never heard of sarcoma at that point. As it was the weekend, I put it to the back of my mind. First thing on Monday morning I phoned my GP surgery and spoke with the receptionist who asked for a brief reason why I need to see a doctor. I explained I had found a lump and I needed it checking, but she explained because it wasn’t painful, “it won’t be anything serious so I can offer you an appointment in five weeks’ time.” I accepted and the wait began.

“In that time, the lump had grown from the size of a marble to the size of an egg and I had gone from not giving it another thought, to googling and finding out about sarcoma and now worrying day and night about what it was. I went in and the GP asked me lots of questions. If it hurt, had I banged it, how long I have noticed it etc. I said I thought it was probably just a cyst but thought it best getting checked out. Right away she said she was referring me to the local cancer centre on their two-week waiting list.

“I went to see my local consultant, who requested I had an MRI just to be sure so the anxious waiting continued. Over three months I underwent three MRI, a CT and PET scans, two lumbar punctures and lots of blood tests before he admitted they had actually run out of tests to perform and he was referring me to The Royal Orthopaedic Hospital (ROH) for a biopsy.

“Unfortunately, the first biopsy come back inconclusive! So, I was told I’d need another biopsy preformed this time under general anaesthetic and I would be an inpatient for five days. The anxiety was high as I’m also a single mum to a child with special needs so preparing her for me leaving and being away from her was hard on top of the anxiety over the surgery. The surgery went well, however, and I was discharged after five days with a 3cm wound to my knee.

“On the second day of a holiday in Wales, I got the call from my team nurse. “Natasha, we have the results and I’m afraid its cancer.” It didn’t come as a surprise to me. We arranged for me to come into clinic the week after and I ended the phone call in a daze, not knowing if I should just carry on the holiday with my daughter as normal while inside my head was spinning.

“A week later I was given a consultant: the fantastic Scott Evans, who has such a manor about him he fills you with confidence, reassurance and has a general caring nature about him.

“In September I was taken in for removal of some swollen nodes and another wait for the results. By this point I was getting frustrated and scared. I now knew it was cancer and I’d had it since March when I found the lump and we were now six months in with no treatment. A week passed and I received a letter to come in the following week. I arrived at that appointment just ready to discuss treatment and get things going. Scott told me he was surprised to find that the swelling in my lymph nodes was actually the cancer that had spread.

“I sat there in a daze of shock. For some reason I hadn’t been as concerned with the lymph node swelling like I had those months before with the original lump. Scott explained this now changed things as the treatment would be much more complex than simply cutting it away.

“Two weeks passed and we were now in October the frustration and anxiety mounting knowing I still had this thing in me growing by the day. I saw Scott who had consulted with another leading surgeon in London who had agreed to treat me and have a one-of-a-kind surgery at The Royal Marsden Hospital in London. This surgery was called isolated limb perfusion or (ILP) for short. By the time I’d had a scan in London and the initial consultation it was now November by the time I’d had the date for this surgery.

“In January, Scott explained that unfortunately, IPL surgery wasn’t successful and that I would need the tumour cut out in a surgery called limb salvage surgery. However, this time I’d need to be cut from my groin to ankle with a hole around my knee cut out where the tumour was and I’d need to be in hospital for a month.

I had the tumour cut away in three separate surgeries, after the second surgery, I received partial results from pathology. That was enough for Scott to confidently say there was no more cancer left. 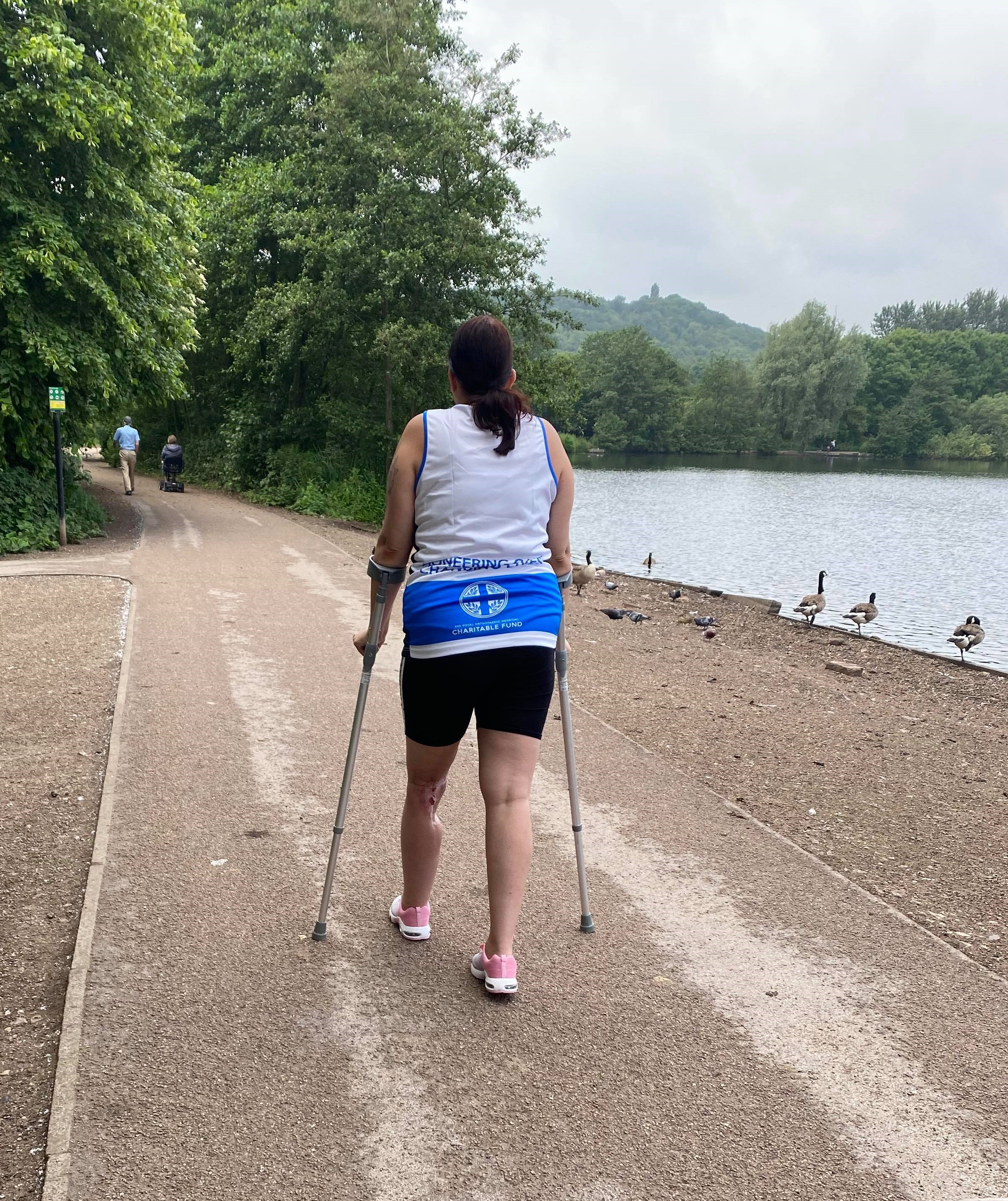 “The reconstructive surgery was then brought forward a week to reconstruct where the cancer took over. This was a nine-hour surgery due to the fact I had lost three muscles to the cancer and they had to fill the hole the tumour had made. I remember when I was waiting to be put to sleep, Scott come into the room and asked how I was feeling, to reassure me I was in safe hands etc. I asked him how many people were waiting to work on me and he said around 15 people! I still can’t quite believe I had that many people helping to save my life in that one surgery alone. ROH were there for me again and I had Carol, a Macmillan councillor, to talk through my worries and help me through and who continues to be there for me to this day.

“I look back on the last 18 months and I can see how strong I have been. Learning to walk three times, multiple surgeries and third-degree burns from radiotherapy have been extremely hard to deal with but I recently celebrated being one year cancer-free! I had a tattoo done with the saying “with pain comes strength” because if I can take anything from this it truly is the strength that I never knew I had. I don’t think I would have gotten through it without Scott and the wonderful staff at ROH making sure I feel 100% supported and I felt reassured through the whole process that they truly do have the best interests of their patients at the forefront of their work.”

Natasha fundraised for us in 2021 and raised over £500 in support of the oncology ward in which she stayed.

All the funds raised will go towards supporting the ward with initiatives to support patient experience as well as supporting families and carers of those who visit the ward. Not forgetting providing specialist training, equipment and knowledge to the staff on the ward.