Richard Beechey is a Sales Manager from Stamford in Lincolnshire. He was treated at The Royal Orthopaedic Hospital (ROH) for a liposarcoma. Here, he tells his story in his own words.

“Over the past 25 years or so I have been troubled by a recurring atypical lipoma, which is a benign soft tissue tumour. Over this period I had it surgically removed three times, latterly twice at The Royal Orthopaedic Hospital (ROH). The tumour was large and embedded deep within my upper right chest area and under my right armpit. As nerves and vital arteries were embedded within the tumour, it was never possible to completely remove it and any procedure had the aim of removing as much tissue as possible from the mass. A procedure under Mr Scott Evans in July 2018, resulted in 1.2kg of tissue being removed, and it was estimated that around the same amount remained.

“Over the coming year, it was clear to me that the tumour was growing back aggressively, and at a follow-up and MRI scan in August 2019, Mr Evans was concerned enough to advise that a biopsy should be arranged asap. I had previously been warned that each time the tumour grows back, there was an increasing likelihood of cells becoming cancerous. The biopsy was arranged shortly after, and whilst at work, I received a call from Emma-May of the Oncology department that unfortunately it had revealed cancerous cells and they now needed to get rid of the whole tumour and that an appointment would be made for a consultation with Mr Evans in the near future. 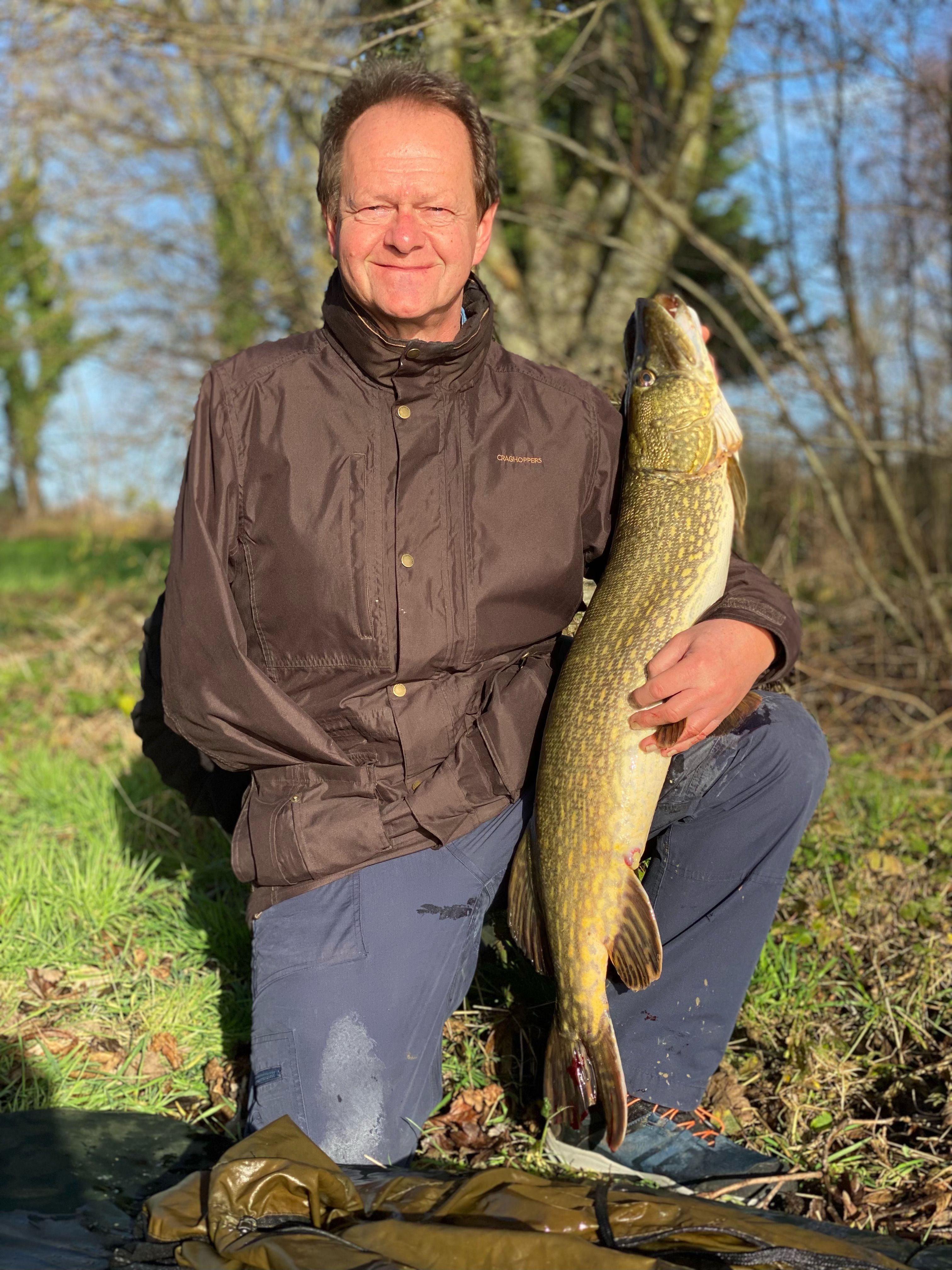 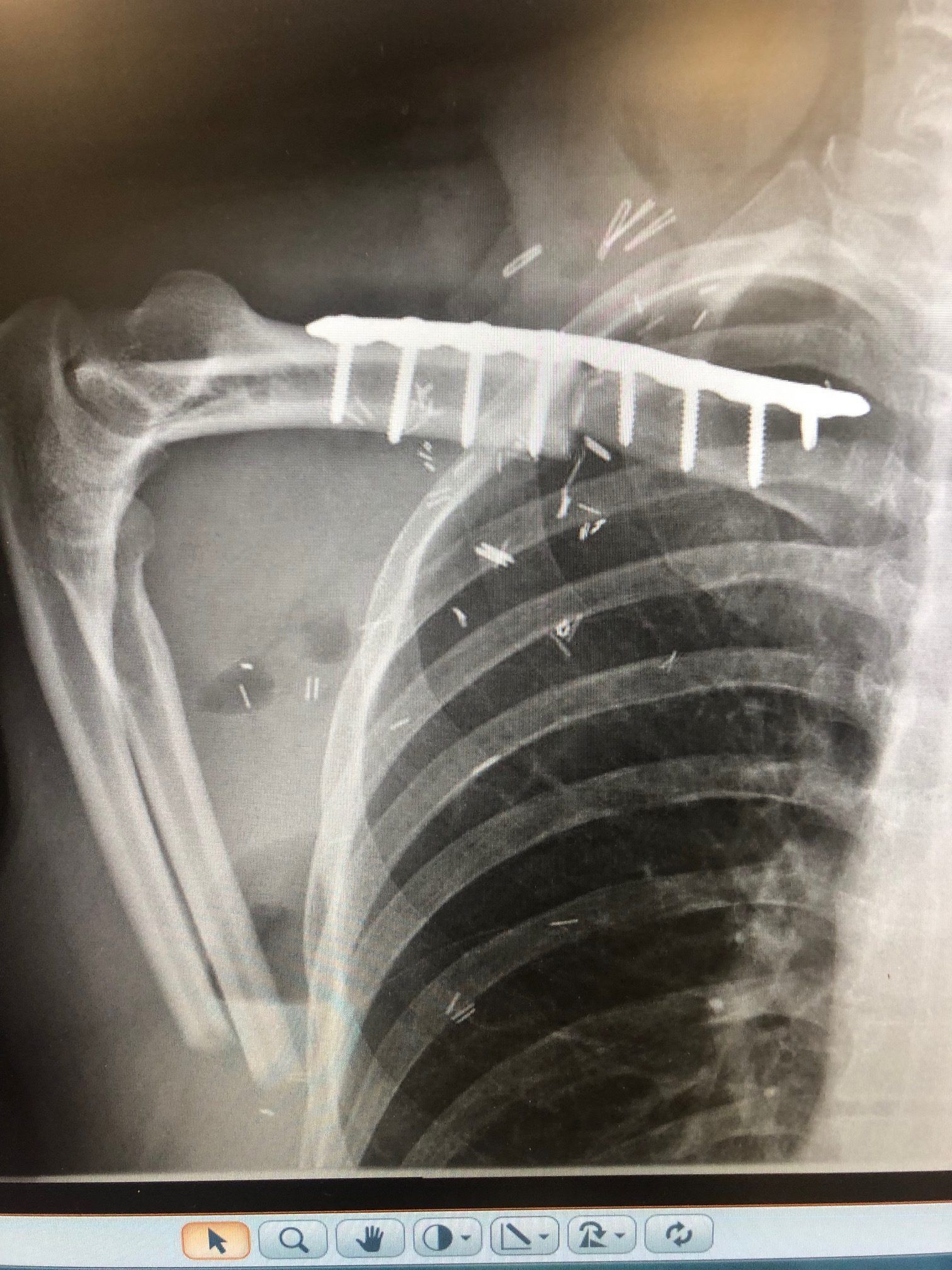 “In September, my wife Lynn and I travelled to ROH to meet with Mr Evans and his team. During the consultation, it was confirmed that the tumour was now classed as a dedifferentiated liposarcoma due to its cancerous content. My wife and I prepared ourselves for the worst news, and Mr Evans advised that the only possible way to completely remove the tumour was to perform a forequarter amputation of my right arm. This is a disfiguring and life-changing procedure, and the news slowly sunk in during an emotional few minutes. Then Mr Evans made us aware that although the result was disfiguring, there was an opportunity to undergo a reconstruction which to the best of his knowledge had only ever been performed once previously in Japan. He suggested that we take break before going into detail, and he would ask a plastic surgeon colleague, Mr Jagadeesan, to join us upon our return.

“Lynn and I went outside for some fresh air and inevitably had a few tears. We decided to call our daughter Amy to give her the news, who had only a couple of weeks previously started her first job after university. Amy took the news in her usual stoic manner and assured me that I would be fine.
“Upon returning to the consultation, Mr Evans introduced Mr Jagadeesan and explained the procedure that was technically known as a reconstruction of the right shoulder using a free vascular osteo-myocutaneous forearm flap. Due to the fact that a forequarter amputation results in the loss of a shoulder and hence the symmetrical shape of the upper body, the reconstruction would be to fix part of my amputated right arm back on which would result in my elbow replacing my shoulder to give a symmetrical solution. Mr Evans and Mr Jagadeesan seemed keen to proceed with this solution, which the former referred to as “the funky version”! I was made aware that there were some additional risks and that the procedure would extend to around 9-10 hours as compared to around 2 hours for a standard fore-quarter amputation of an arm.

“This was a lot of information to take in, but Mr Evans said that a quick decision was required so that they could start to prepare the considerable team of people that would be required to attend the procedure. He also said that, due to the complexity and after care required, the operation would have to be done at the Queen Elizabeth Hospital Birmingham (QEHB). He asked if it were possible to have a decision the following day, and Lynn and I said we would find accommodation for the night locally and return the following morning.

“Having checked into the hotel, Lynn and I discussed the options over a pint or two (wine for Mrs B obviously) and we decided to go for “the funky version”. We returned to the next morning, and all concerned seemed pleased and a little excited upon our decision. On Monday 29 October, I reported in to QEHB at 7:30. Lynn and I had stayed Sunday night at a nearby hotel, and had enjoyed a good dinner which we jokingly referred to as “the last supper”.

“The procedure lasted around 11 hours and Lynn, who had been waiting at the hospital to see me, was persuaded to return to the hotel at around 22:30 as I was still in recovery. Not knowing what to expect, she will always remember being greeted by a beaming smile when she saw me the following morning back on the ward on the dot of visiting time. Thankfully, all had gone well. The care I received over the 10 days that followed was just amazing, and aided my recovery greatly. I was attended to by incredibly caring nursing staff, and quickly regained my appetite and strength. I also received visits from Mr Evans, Mr Jagadeesan and members of their team who assured me that the procedure had gone according to plan. Within 48 hours, the physiotherapist had me out of bed and standing and within a few days I was able to walk up and down the corridor and later on up and down the stairs to the shop. Over the 10 days, I received numerous visits from family and friends who seemed pleasantly surprised at my wellbeing and spirit.

“On 7 November I was discharged and convalesced at home, expertly and lovingly cared for by Lynn, and Amy who came home as frequently as possible. The stitches came out a couple of weeks later, and I attended QEHB again on 4 December when I was told that I was cancer-free and that no follow-up chemo or radio therapy would be required.

“I have an old friend, Phil, who lost his left arm in a motorcycle accident when he was a teenager, some 40 years ago. When I learned about my amputation, and before the procedure, I met with him at his workplace offices in Leicester. He told me that there was nothing he couldn’t do! He enjoyed fly fishing and also shooting at a very high level. He assured me that I would be just fine, and that you quickly find a way around doing most tasks single-handedly. He also said that I should put anything I couldn’t do to the back of my mind and concentrate on the things I could do.

“In December I was back at my job as a Sales Manager working from home, quickly adapting to typing with my left hand (my right arm was my dominant arm unfortunately). By January 2020, I was back driving and commuting to work in Wellingborough, some 40 miles away. My work colleagues were pleased and relieved to see me back and in one piece. Within a couple of months Covid happened and I was back to working from home.

“Throughout 2020, life continued pretty much as normal (notwithstanding Covid) and I adapted to life as an amputee. My mindset was that my situation should have the absolute minimum effect on my life and the life of those around me. I focussed on the positive nature of the reconstruction part of the process, thinking how it could have been worse if I had not been in the fortunate position to have this done. I can honestly say that I have not had any negative days, and am still living life to the full – quickly adapting and enjoying the challenge of digging the garden, planting shrubs, mowing the lawn, cooking, housework, cleaning the cars (look out – one handed pressure washing can get a bit wild!) socialising and enjoying holidays (when possible). I have a variety of gadgets and aids – a spinner on the car steering wheel, electric corkscrew and salt/pepper mills, one handed forks with serrated edges etc. I do suffer from “phantom limb pain”, which is a bit weird to begin with, and varies in intensity.

“The love and support of family and friends has been overwhelming, and they quickly realise that I am the same old me, just with a bit missing. During the latter part of 2021, I started to get back to rehearsing with my band The Amber Squad which was first formed in the late 70’s. This culminated in our first “come back” gig – our first since 2019 (my last with two arms!). The concert in my home town was sold out and was a very emotional event. Also, early in the New Year a couple of friends took me fishing, a hobby I have enjoyed since I was 11, and am determined to conquer in my present state. They adapted the tackle set up so that the rod was supported and I could cast and wind with my left hand. I managed to catch three pike, the largest being 15lb 4 oz, in a most memorable day.
“In December last year, I also undertook the annual 5km ‘Santa Fun Run’ in Burghley Park, in memory of my dear step-father-in-law, who we lost to cancer in 2021. 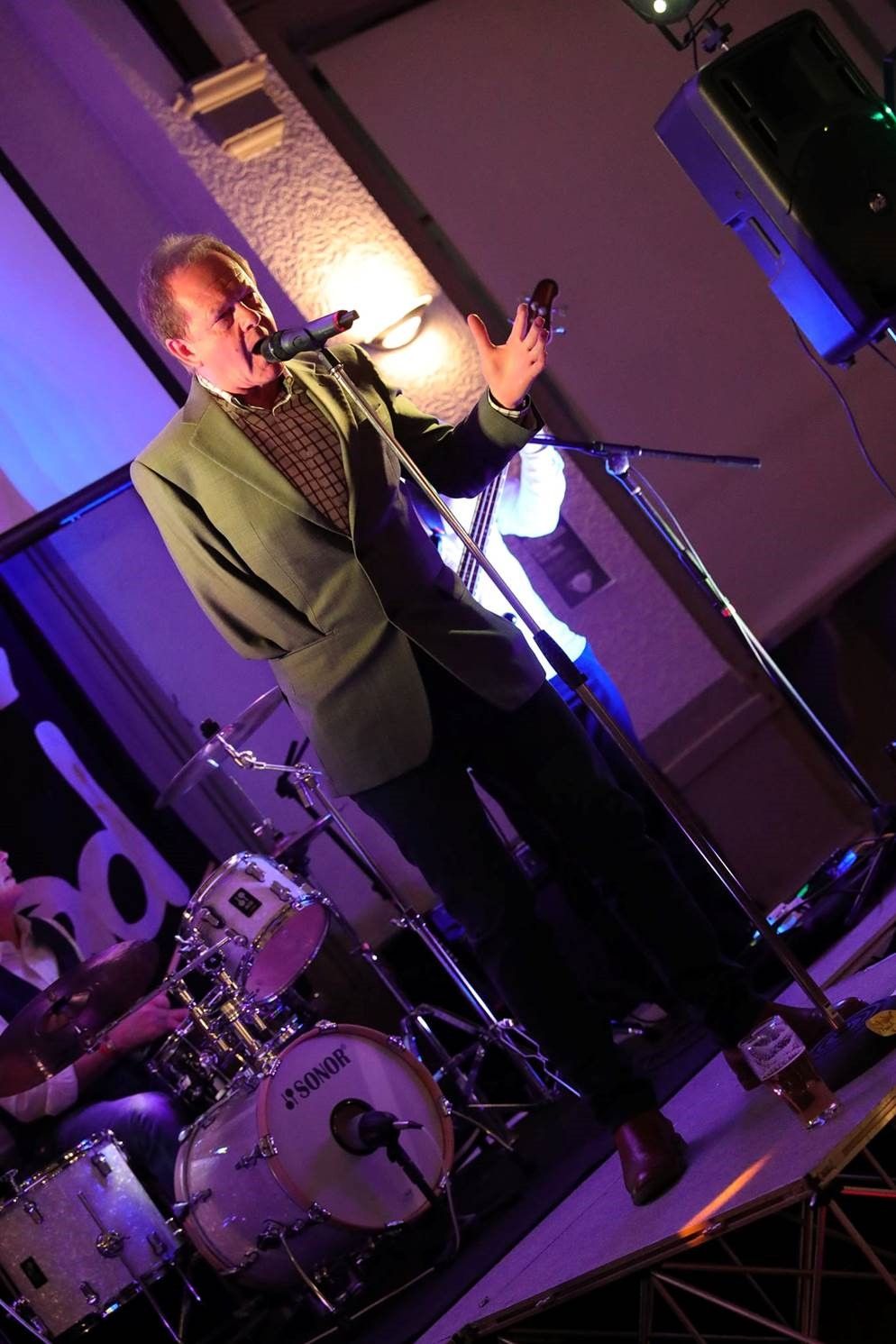 “Two years on, hardly a day goes by when I don’t think about Mr Evans, Mr Jagadeesan and the other amazingly skilled individuals that performed the procedure and gave me such an incredibly high level of care and support in the days following. I was so pleased to be able to make a donation to The Royal Orthopaedic Hospital Charity from the proceeds raised from The Amber Squad concert in December.”